Professor Svenson and Dr. Theo Valdivik announce the discovery of the remains of a Viking long ship at the bottom of Loch Ness. Using their NAVRAD remote bottom probing submarine, the two eminent academics scanned an area of the loch they had carefully selected using their exclusive mathematical formula and a little luck. Professor Svenson, who has previously discovered many new wonders in Loch Ness, said "we are very excited about this find. Initially we thought we had just come across a few rotting old fence posts but it soon became clear that we were looking at the oldest surviving remains of the Viking presence in Scotland."

The pair were even more amazed to discover preserved coffee grounds in the timbers. CoffeeAll previous data indicates that the Vikings did not have access to coffee and this find may cause a whole chapter of their history to be re-written as it now appears that they may have sailed as far afield as South America before heading for the ancient cultural capital of Loch Ness, Drumnadrochit.

The remains will now be sent to a mineral processing unit at NASA where they will be carbon dated and injected with fleuron, a special substance that glows if the material around it is more than 1000 years old. 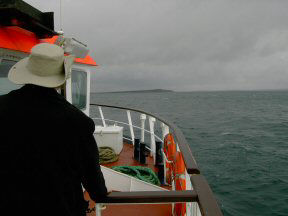 Professor Svenson denied that his find was simply a cheap PR exercise to try and boost the flagging tourist season or a vain attempt to get a plaque erected with his name on it.

"That's quite ridiculous. Eminent researchers like me are only devoted to the science and research of Loch Ness and would never issue statements unless we thought they were true. The fact that this is the holiday or silly season has absolutely nothing to do with anything".

The Highlands of Scotland Tourist Board was unavailable for comment at time of going to press.